*
I've never been to Moscow and about Saint Basil have always had the fleeting but intense impression as a fulcrum around which revolves all along and last forever the Red Square, the city of Moscow and all the Russia - that of the Tsar, that is not conquered by Napoleon, that of the Revolution, that of the Sputnik. 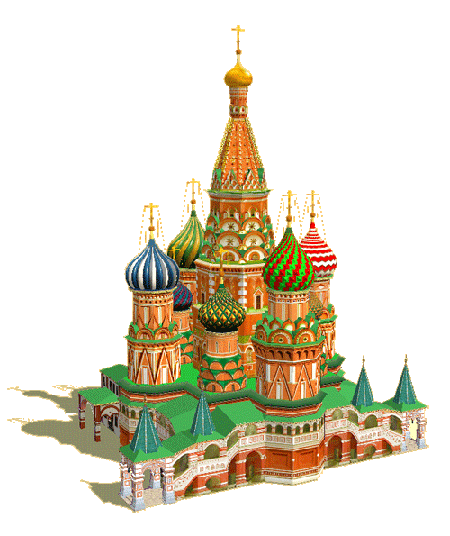 But in early 2008 it came back forcefully to my mind when, after having created the 3D model of Saint Anthony in Padua, I started looking for another great Cathedral, possibly free (ie, not yet realized by any models), and possibly magnificent, perhaps with many beautiful domes.

The Vision
St. Basil was just The Cathedral I was looking for: the famous "onion domes" of Orthodox Churches, the compact and articulate structure, almost a colorful precious censer to glorify God, the animated turrets towers domes pinnacles crosses with a variety of styles shapes colors, the phantasmagoria of wild brain child controlled by a strict geometric thinking...

Since the beginning I conceived it with very saturated warm sharp colors, like in a sunset flaming... I also planned to highlight all the details that make so rich and valuable its structure: the facets of the dome, the finishes and the eyes of the towers, the central tower golden chains, the golden crosses supported by golden chains...

On the web are available a lot of infomation - simply searching for Basil Moscow I found: about 40,000 pages on Google Images images.google.com, 6,000 photos on www.flickr.com, 2,500 photos on www.webshots.com, etc. etc. Moreover, I found on the web some very useful maps and real-scaled drawings of the Cathedral in the gold-mine books.google.com (more than 1,000 books are available about Moscow, among them some portrait very interesting pictures...) A very good starting point! 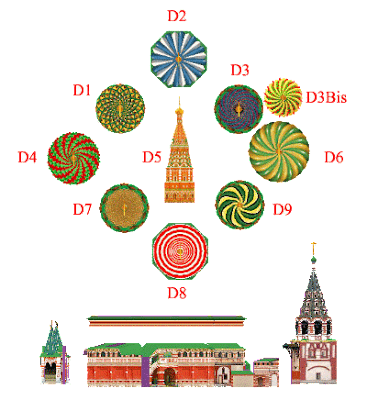 As well as for the Saint Anthony's Basilica model, I tried to define from the beginning all parts and components, marking each one with an expressive name: this working method helps to orderly manage a set of objects (substructures, textures, working files) that refer to a specific  component.

With regards to the domes, I took a special care examining similar of different characteristics, in order to define these homogeneous categories:
A) SMOOTH TEXTURED
including the little domes D1,D3,D7,D9, the little golden dome D5 and the big dome D8; B) RELIEVED COLORED
including the diamond shape dome D4 and the exciting little onion D3Bis;
C) RELIEVED TEXTURED including the two big domes D2 e D6 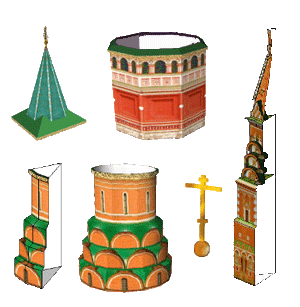 A remarkable preparatory step is to locate all parts and objects that occur more than once in the model; for the Saint Basil's Cathedral we note that a lot of structures present a rotational symmetry of order four or eight, that the little pyramidal dome of the pronaos occurs four times (with unlike sizes), that the four little domes towers are (almost) identical (unlike those of the big domes, that are - unfortunately... for the designer - dissimilar!), that all domes are surmounted by a cross of similar proportions, etc.

Locating these components is very useful for efficiency and efficacy in the realization phase, saving time and effort in achieving a more omogenus result.

(*) in this context for REUSABLE COMPONENTS we refer to those parts that can be designed and realized only once and then duplicated - with SketchUp a few options are available, for example the creation of GROUPS or COMPONENTS, and we can duplicate these object simply moving, or rotating, or even changing the original size(s).
* 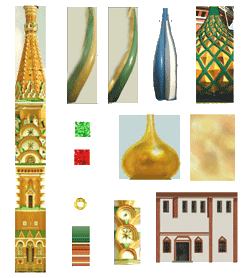 For this model I used about 80 different textures, trying to reduce the size to strictly necessary. As a standard I defined a definition of about 25pixel/m and a precision (in saving jpeg files) of 50/100; with this standard a wall of 10m x 10m is depicted by a texture of 250pixel x 250pixel that produces - saved with precision 50/100 - a jpeg file of about 15kB.

Almost all the textures are obtained by merging several images and working them with a graphic tool.

Some textures - i.e. the golden little dome and the crosses texture - are free-hand (re)painted
*

*
Depending on the dome category, the realization presented some critical points.

For Category A  (Smooth Textured) domes, the procedure is conceptually plain but practically very critical: first we must find the "frequency" of the dome (dome with 12 sectors, or 20 sectors, etc.), second we have to create a n-sector dome, third we have to paint a single sector (named the generating sector) with a proper texture (this is a critical step!) and finally we can obtain the textured dome simply rotating (with duplication) the painted sector. The texture for painting the generating sector can be obtained from a photo, with proper deformation, and using a trial-error process between SketcUp and a graphic tool (for further information about this procedure you can refer to my pages http://www.enricodalbosco.it/3dwarehouse/santo/ and http://www.enricodalbosco.it/Beethoven3D/ ).

The Category B  (Relieved Coloured) and especially Category C (Relieved Textured) domes gave me major gratifications, even if - at a three or four diameters distance - it's difficult to appreciate the structural differences with those of Category A; the only exception is the D3Bis dome, that requires absolutely - at any distances - a Relieved structure! 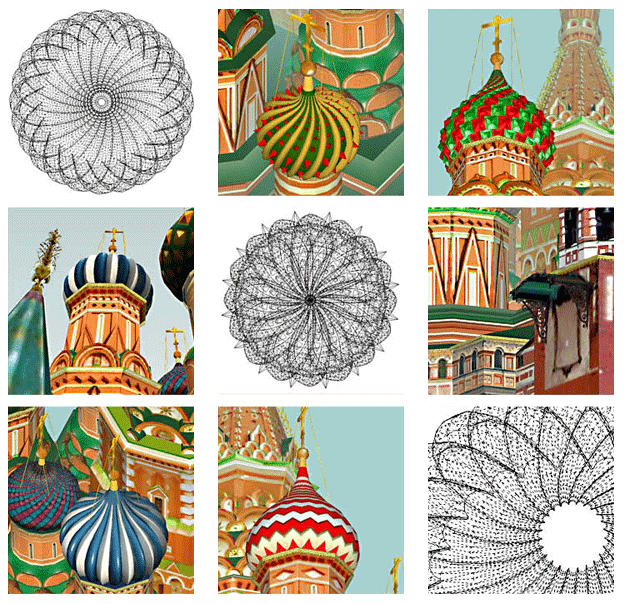 THE FULL 3D AND THE GOOGLE EARTH VERSION 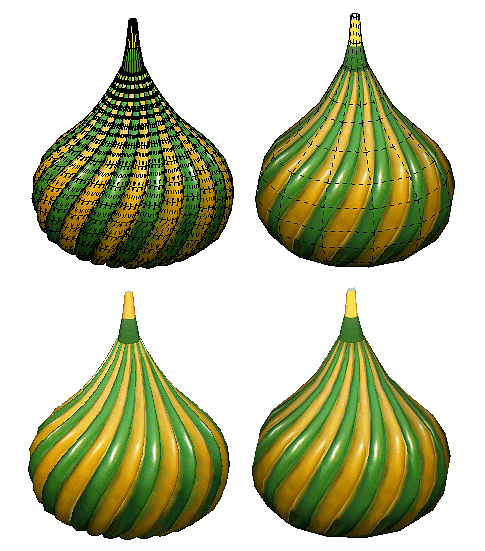 The figure in this section shows an example of the differences between the two versions: on left side is the more detailed version, on the right the simplified. You can quickly appreciate the variance in the complexity, but you can also see that the look sounds quite alike - and good! - in booth cases.

The following table shows some specifications for the two versions: 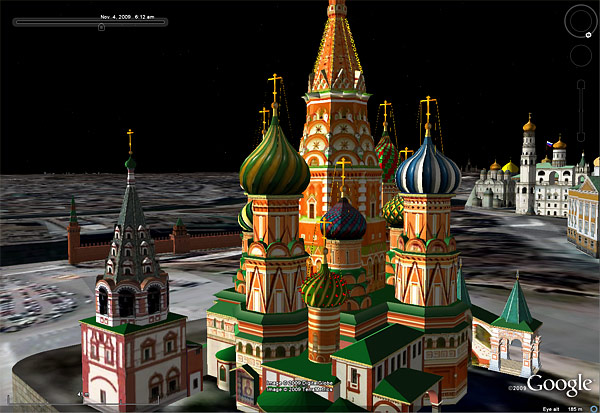