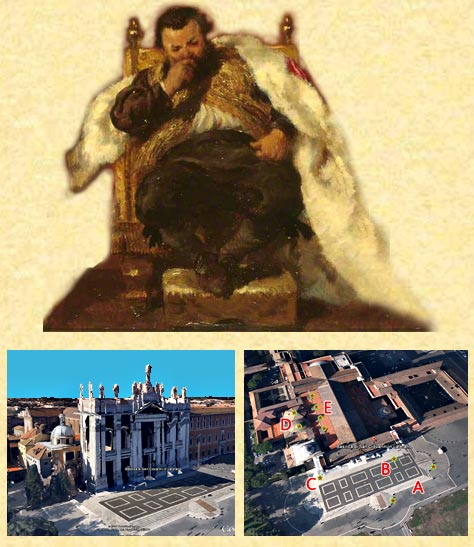 Don Sancho Panza, Governor of Barataria painted by John Gilbert (1875)
Today Sancho is puzzled: he is closely watching, on the experimental area, in Rome, of the new Google Earth version, the auto-generated 3D model of St. John Lateran's Archbasilica.

The model has attracted his attention because it seems significantly different - in a good way - than the auto-generated 3D Models of the surrounding buildings...


In this appendix I will only expose "the facts" ("the images") for two models, leaving the reader - for additional comments and considerations - to PART 4 of my article, which I plan to publish in the course of the next week.


APPENDIX A - ABOUT ST. JOHN AUTO-GENERATED

In this appendix we will examine two current models of the Archbasilica St. John Lateran. The first is the auto-generated model as it appears today (24 May 2013) in the experimental area of Rome in Google Earth, and the second is the hand-made model promoted on Photorealistic layer in the Trimble 3D-Warehouse. 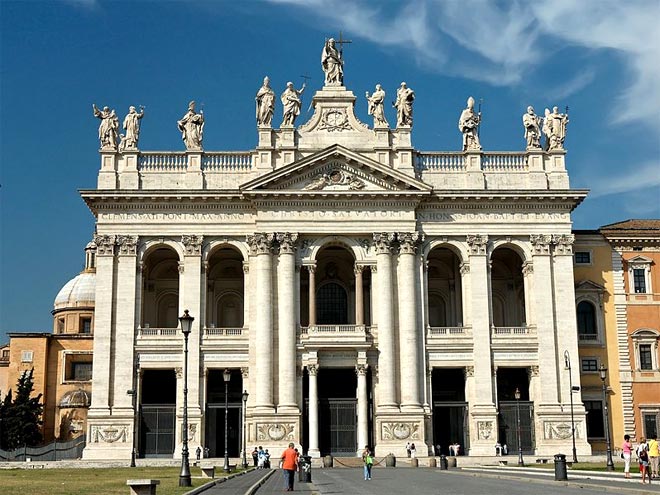 Of the façade by Alessandro Galilei (1735), the cliché assessment has ever been that it is the façade of a palace, not of a church. Galilei's front, which is a screen across the older front creating a narthex or vestibule, does express the nave and double aisles of the basilica, which required a central bay wider than the rest of the sequence; Galilei provided it, without abandoning the range of identical arch-headed openings, by extending the central window by flanking columns that support the arch, in the familiar Serlian motif.

A1. EXPLORING SCENARIO X
Exploring the new version of Google Earth in the experimental area of Rome, you may notice that not all the buildings are made with the same degree of accuracy. In particular you will appreciate some buildings characterized by a greater cleaning: it is the case of St. John Lateran, which emerges from the surrounding landscape, rather approximate (see point "x" in the illustration below), especially for the befitting execution of the southern domes (see point "y"). 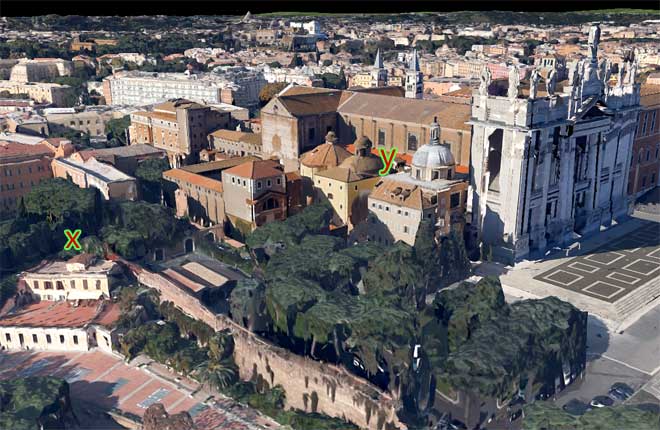 A2. THE AUTO-GENERATED MODEL OF "SAN GIOVANNI IN LATERANO"
Intrigued by these differences in look, I wanted to investigate the case "San Giovanni", looking closely at the specific points marked (see the following illustration) with A, B, C, D, E. 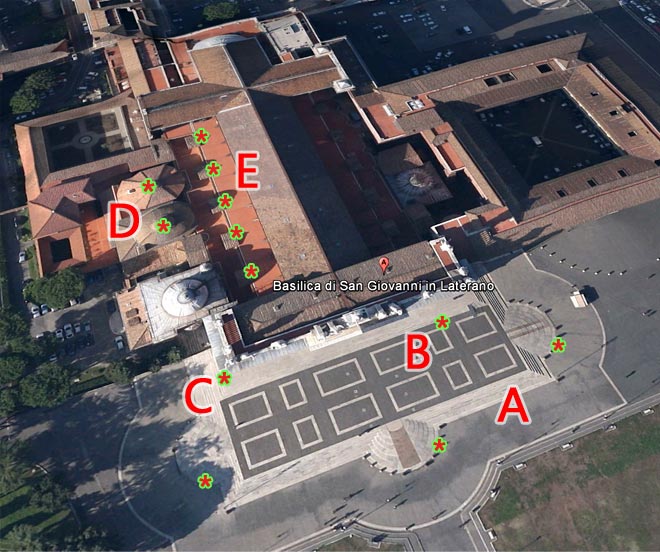 This photo refers to the Google Earth terrain with Photorealistic Layer off-ed at May 24, 2013

And here's a brief description of my observations on these points in the Scenario X (with the auto-generated models):
A - THE SMALL RAMPS
the wide stairway has, in the real world, three elegant small semi-circular ramps, while the model auto-generated shows only the one to the west
B - THE SHADOWS
the photo of the Google Earth's terrain was probably kept about 4:00 PM and so the platform in front of the facade is fully illuminated, while in the 3D auto-generated model it is partially shaded
C - THE LEDGES AND STATUES
the facade of the Basilica is very complex, with numerous protrusions and recesses, with gables and eaves and statues; most of these "details" are also present in the model auto-generated, while lacking in almost all other buildings of Scenario X
D - THE LITTLE DOMES
the small southern domes of the basilica present the characteristic mushroom shape, which are reproduced in an acceptable way in auto-generated the model, while in many other cases of Scenario X they are not equally reproduced
E - THE SKYLIGHTS
on the southern side of the basilica there are five little skylights that are correctly reproduced in the model auto-generated, while in many other buildings they are not equally well reproduced


The following image shows the points B, C, D on the 3D auto-generated model, as is appears in the new version of Google Earth today May 24, 2013. 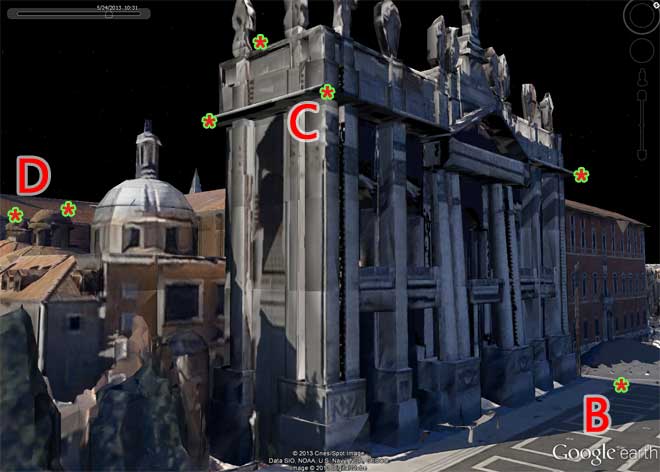 This photo refers to the auto-generated model of the Basilica on Google Earth at May 24, 2013

A3. THE HAND-MADE MODEL OF "SAN GIOVANNI IN LATERANO"
At this point, stimulated by the details C and D, I have performed a search in the Trimble 3D-Warehouse and I found the model shown in the next picture, that - already seen from afar - made ​​me realize to be on the right track. 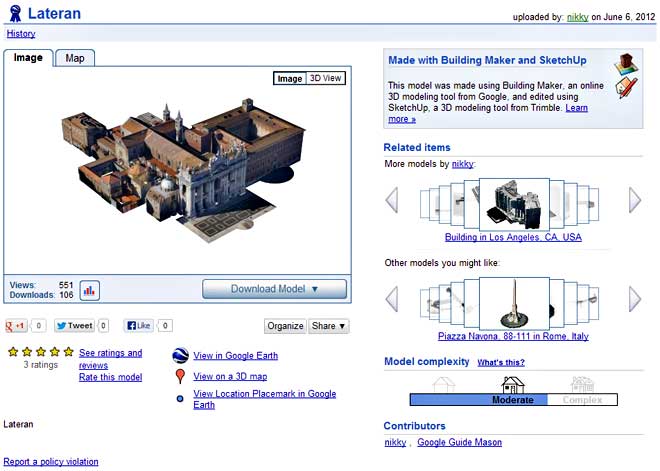 The model of The Lateran Basilica made with Bilding Maker and SketchUp 7 in June 2013.

The most interesting fact is that the model has been created using Building Maker - and this can be investigated by entering the model and extracting the 4 isometric views typical of that tool -, and therefore has been enhanced using SketchUp 7 - as can be seen also by some details related mainly to the domes and ledges. 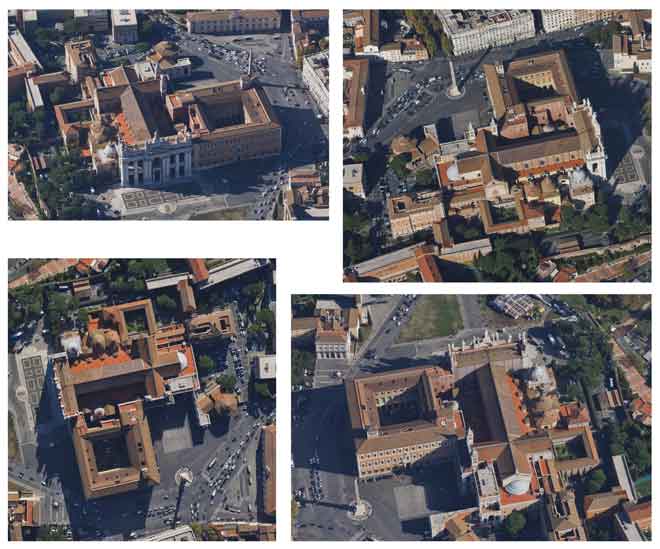 The 4 isometric views of Building Maker extracted from the nikky's model. 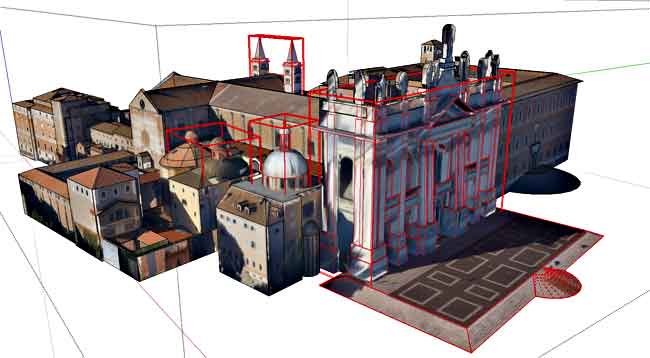 In red there are highlighted some details probably enhanched using SketchUp.

A4. AUTO-GENERATED VS HAND-MADE MODEL OF "SAN GIOVANNI"
In the following couples of images now I provide a comparison between the two models as well as you can see in Scenarios X and Y as at 24 May 2013.

WARNING
hover the mouse over the written X... and Y...
to see the image in the corresponding Scenario
(perhaps you may have to wait a few seconds before you see the Y images)

A - THE SMALL RAMPS and B - THE SHADOWS 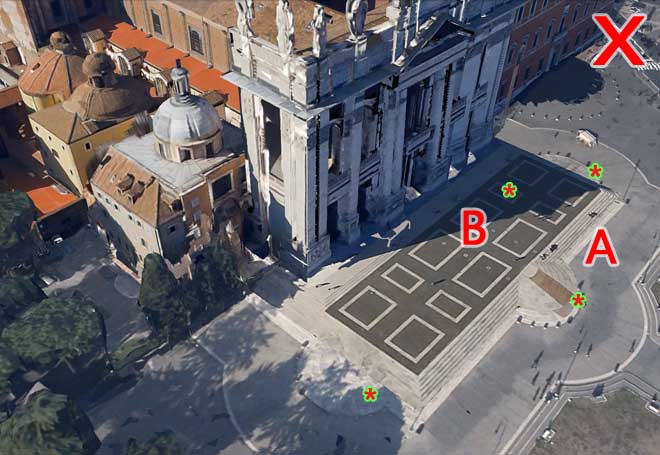 C - THE LEDGES AND STATUES 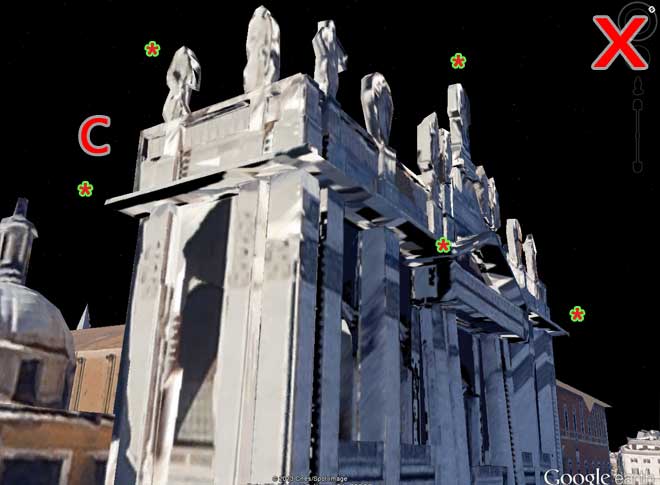 D - THE LITTLE DOMES and E - THE SKYLIGHTS 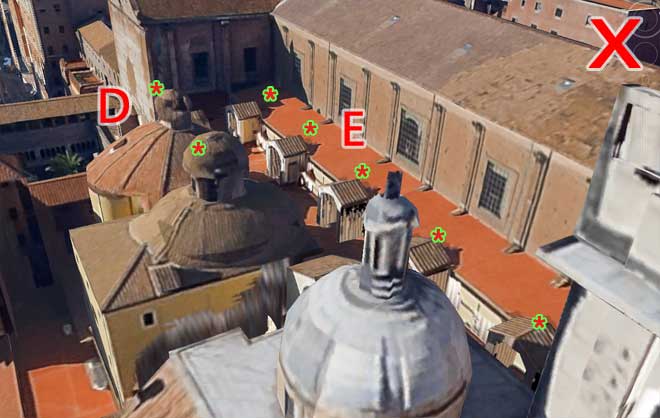 To allow a careful examination, I carry over into the following the three pairs of images: 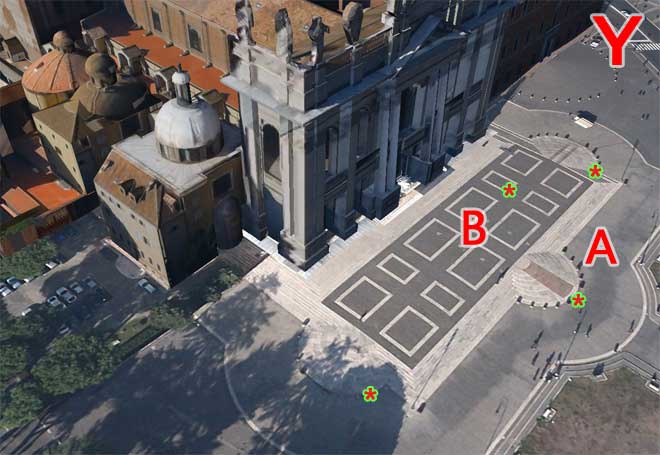 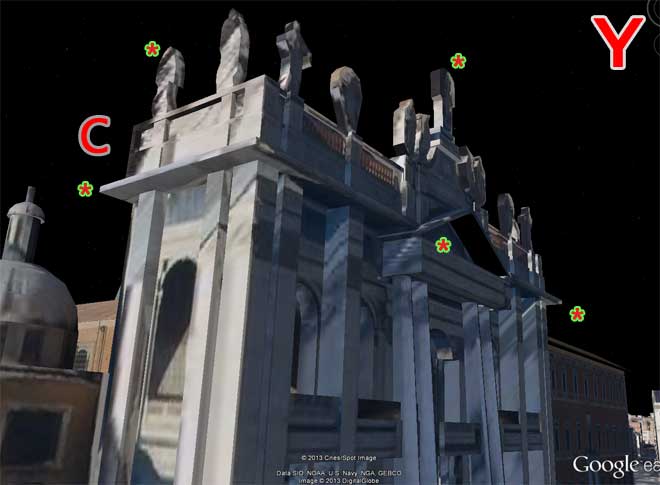 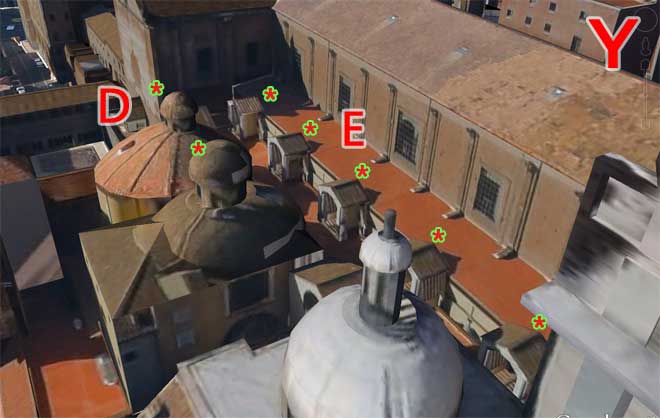 END OF APPENDIX A 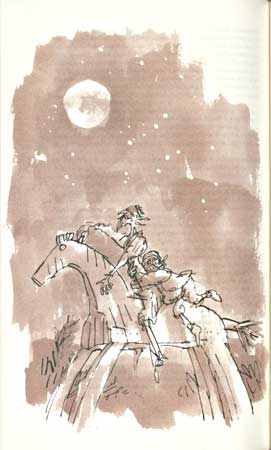 What do you think of this comparison?

How to interpret the similarities and differences?

It 's true that the 'human' modelers will no longer be part of the development of 3D models?

I personally for some time have made a clear idea about these topics - and of course also you would have gained your beliefs.

But on these and other topics we can discuss (probably the next week) in the oncoming Part 4.